Nothing. He still would not appear.

The head of the great circle walked to the centre. All eyes were on him. He nodded to the drummers. They lifted their arms and with a great bang, the rhythm started. He indicated to those on other instruments to join in. The music filled the air and indistinctively the others joined in the great chant, singing and wailing, the noises filling their very soul. The head indicated it all to stop. Stunned the music around him dropped out.

He gave a great scream out into the night, they waited and watched. 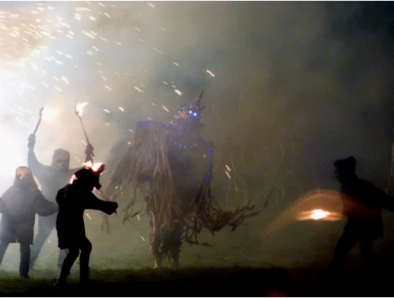 From behind him, a great roar, a shadow appeared and then the figure with the glowing eyes stepped forward. The head fell to his knees and crawled to the edge of the great circle once again. The drummers started drumming, the singers started singing and a great cheer broke through the crowd.

No-one noticed the head collapse onto the floor. His body now a shell, his soul sacrificed to the great one.

Written in response to Sue Vincent’s prompt – #writephoto. You can join in this weeks image or have a gander through the many interesting posts inspired by this wonderful photo by clicking here.

It’s been a long time since I took part in these challenges (or indeed have done any writing) and I am certainly feeling rusty but I enjoyed flexing those writing muscles and having a go.