Some times tending to the allotment can be a slog. The endless weeds, the war with slugs and of course, trying to navigate the joy that is the great British weather.

But watching this little chap lovingly attend to his sunflower 🌻 and the joy on his face when he gets to bring home a basket of bounty makes it all worth it.

Anyone else grow sunflowers? Ours just begun to bloom this week.

I adored this movie as a child. I watched it over and over. My gran used to always buy me a big galaxy bar for Christmas and I used to devour it, feeling like I was one of the kids from the movie.

I adored the book too. Actually I adored all of Roald Dhal’s childrens books (except James and the giant peach, never a fan of that one). I regularly had one book or another borrowed from the library, then Nestle did a wonderful thing, a free Roald Dahl book with every cereal box! It was a dream come true.

My OH is not a big reader per se but when I asked him who his favourite author was and you guessed it, he replied Roald Dhal (he’s actually read one of his adult novels too).

So when I was wandering around Largs last week, I popped into a traditional sweet shop and these little bars beamed back at me. Hubby was delighted when presented with the little treat.

Do you have a favourite childhood movie?

The babysitter was asleep on the sofa, mouth hanging 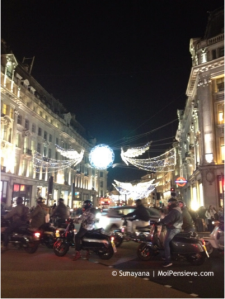 open, a slight dribble making a break down her chin. I crept quietly behind it then made my dash for the window, dropping to the floor then hid my tiny form behind the curtains. I stole a glance back to the sitter, she hadn’t moved. Taking it as a sign I raised myself a little higher until I could see out. My eyes soaked in all the flurry and excitement on the streets below, shimmering streetlight displays, late-night food sellers, market stall holders even a gang of bikers had joined in what seemed to be the after-dark party of my neighbourhood. How I longed to be part of the commotion. One day, when I am just a little bit bigger, no-one will be telling me bedtime.

Short fiction piece of 136 words for FFfAW challenge – This week’s photo prompt is provided by Sunayana with MoiPensieve. Thank you Su!

A friend of mine has an adorable five-year-old (5YO) son. He looks like butter wouldn’t melt, yet secretly he is a genius and can win most arguments – not with pouting or tantrums like most kids, worse he uses logic! After a recent house move, he began to attend a Church of England School. My friend isn’t religious at all, she would definitely give Songs of Praise a wide berth…but the school has excellent ratings. The problem really started when his pet died. The conversation went a little like this:

5YO “Well, how come humans come back from the dead?”

MUM laughs, thinking some TV series has probably put this idea into his head: “Humans don’t come back from the dead.”

MUM (wondering if she should be checking up at school): “No, she didn’t. You must have got confused.”

5YO (getting frustrated now): “I’m not, he’s called Jesus. He died and then came back to life.”

MUM (sighing relief): “Oh that’s different. He only did that because he was the son of God. You won’t do that.”

My friend was dumbstruck. How do you combat that argument? She has decided all future religious discussions will be left in the far more capable hands of the school.

When did kids get so smart?.. Hope this made you smile as much as it made me! Enjoy – KL ❤

Helen peered through the ornate metal fence posts. Her mother had forbidden her to go near the old house.

It was strange, her mother told her. Her mother also said the old man that lived in it was strange too. Yet that didn’t stop Helen from staring. She thought the house was beautiful.

“Hi there”. The voice startled her and she strained to see where it was coming from. Glancing around she spotted through the fence an old stooped man behind the wall below the fence. His hands caked in mud had clearly been planting in the flower bed. Helen’s mind flashed with panic, she wasn’t meant to talk to strangers but he had seen her now, it would be rude to ignore him.

“Hi,” she said quietly and then removed her hands from th

“Admiring my garden?” the old man said then gestured the flower beds. She nodded, not really sure what to say. She hadn’t, it had been the house she was admiring. Helen watched the old man intently, looking for the darkness that her mother believed he had. Yet all she saw was kindness, could her mother be wrong?

“Do you want to come inside?” he asked. Helen’s eyes grew wide, she knew she should say no, it was what her mother would want her to do, but the old man with the kind crinkled face couldn’t be anything to worry about could he? She nodded and he got to his feet, pointing towards the entrance gate and then began brushing off the dirt from his trousers.

“Helen!” Helen stopped dead in her tracks, then began to turn around slowly as the piercing shrill of her mother’s cry filled the air. As Helen turned she spotted her mother stood hands on her hips, her face red with both anger and exertion. Oh dear.

“Never mind skulking, get over here now! I told you not to doddle home.” Helen took one last glance at the beautiful big house, the old man seemed to be gone. Ignoring her disappointment she traipsed towards her mother. Maybe the old man would let her look another day…

“The truth is not always beautiful, nor beautiful words the truth.”
― Lao Tzu, Tao Te Ching

Originally written in response to #WQWWC theme – Beautiful. The above quote seemed too fun not to play around with. What do you think? Did mother know best?