Areopagitica; A speech of Mr. John Milton for the Liberty of Unlicenc’d Printing, to the Parlament of England is a 1644 prose polemical tract by the English poet, scholar, and polemical author John Milton opposing licensing and censorship. Areopagitica is among history’s most influential and impassioned philosophical defences of the principle of a right to freedom of speech and expression. It is regarded as one of the most eloquent defences of press freedom ever written because many of its expressed principles form the basis for modern justifications of that right.

Milton precedes his argument by discussing the purpose of reading. He mentions that Moses, David, and Paul, were all learned, which reminds his Protestant audience that being learned involves reading “books of all sorts”. He argues that this includes even the “bad” or heretical books, because we can learn from their wrongs and discover what is true by 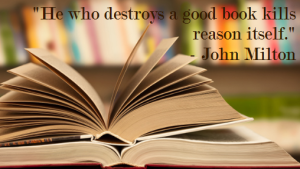 considering what is not. Milton’s point is that God endowed every person with the reason, free will, and conscience to judge ideas for themselves, so the ideas in a text should be rejected by the reader’s own choice, not by a licensing authority. Also, the mind is not corrupted simply by encountering falsehood. Milton points out that encountering falsehood can actually lead to virtuous action, such as how St. Paul’s converts had privately and voluntarily burned Ephesian books considered to be “magick”.

Milton was quite the ladies’ man

In fact, he was married quite a bit. In 1642 he married Mary Powell, who died in 1652. In 1656 he married Katherine Woodcock, who died in 1658. In 1663 he married Elizabeth Minshull who outlived him. There are indications that living with Milton was not easy. His first wife, who was much younger than him, lived most of their married life separated from her husband.

For this and other interesting facts visit classicbookreader