Marian Keyes (born 10 September 1963) is an Irish novelist and non-fiction writer, best known for her work in women’s literature. She is an Irish Book Awards winner. Over 22 million copies of her novels have been sold worldwide and her books have been translated into 32 languages. She became known worldwide for the best-sellers, Watermelon, Lucy Sullivan is Getting Married, and This Charming Man, with themes including domestic violence and alcoholism.

In an interview with glamour magazine Marian says the following on writing:

“I’d rather never write again than not have a happy ending,” she says. “I might be bleak, but I’m hopeful. Where there’s life, there’s hope – it might not be the way we fantasise it as looking, but it’s there. Humans are amazing, so adaptations – we’re heroic. For some of us, it’s a victory to even get out of bed. We’re triumphing every day by every 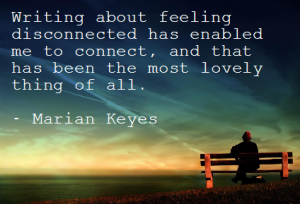 single thing we do.”

For those who want to be a writer, Keyes has plenty of advice. She reads writers she considers “better” than she is (“Like they say, dress for the job you want, not for the one you have”), but her big tip is simply – just stick at it.

“It’s very mundane to be a writer,” she admits. “It means sitting in front of a blank screen or page and writing. If there’s a character in your head, then write they’re story. It doesn’t have to be fully formed yet. Just write the first word, then the second. Writing is ONE percent inspiration, 99 percent perspiration. It’s work and you have to go over it again and again until it’s right.”

Marian had no intention of ever writing a novel.

On her webpage biography she says she started writing short stories in 1993 “out of the blue.” Though she had no intention of ever writing a novel (“It would take too long”) she sent her short stories to a publisher, with a letter saying she’d started work on a novel. The publishers replied, asking to see the novel, and once her panic had subsided, she began to write what subsequently became her first book Watermelon.