Jim crawled away from the tunnel slowly, tunnel was maybe too strong a word, it was more a small opening in the network of the mines. Jim knew what was really there, it was the trail the knockers had left as they worked their own lodes in the darkness.

The team Jim worked with scoffed at his superstitious beliefs but Jim’s father and grandfather had mined these caves for many years. Each surviving when many others had fallen foul. It was down to the knockers and the tricks they would play on those that were undeserving, his grandfather and father used to whisper over a drink into the night as they recalled the stories. Other men had never learned.

The knockers needed to be treated with respect, whistling could offend them and making the sign of the cross. Jim knew. And he knew if he treated them well they would lead him to the richest of lodes. Today Jim had left a food offering in the small opening. He knew when he returned tomorrow it would be gone. He would repeat the task for a week, then he would start to open the small trail. He smiled as he imagined the small wealth hidden in the stone, protected by the knockers.

As he left the mines entrance he heard the distant knocking start. They had found his feast and were happy with the offering. ‘Enjoy, I’ll be back soon’, Jim whispered into the darkness. 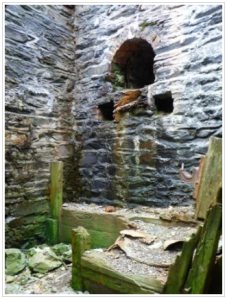 The Mine – image courtesy of Sue Vincent

Originally written in response to Sue Vincent’s #Writephoto Challenge. I couldn’t resist the opportunity to add in a bit of folklore to my entry. Hope you enjoyed. KL ❤

10 thoughts on “The Secrets of the Mines”