On this day… 13th October 1958 – A Bear Called Paddington was first published.

Paddington Bear is a fictional character in children’s literature. He first appeared on 13 October 1958 and has featured in more than twenty books written by Michael Bond and illustrated by Peggy Fortnum and other artists. The friendly bear from deepest, darkest Peru—with his old hat, battered suitcase (complete with a secret compartment, enabling it to hold more items than it would at first appear), duffle coat and love of marmalade—has become a classic character from English children’s literature. Paddington books have been translated into 30 languages across 70 titles and sold more than 30 million copies worldwide.

Before his fictional version appeared on page, Paddington existed as a real teddy bear. Bond saw it “left on a shelf in a London shop and felt sorry for it” on Christmas Eve 1956, and took it home as a present for his wife Brenda. The couple were living near Paddington Station at the time, so 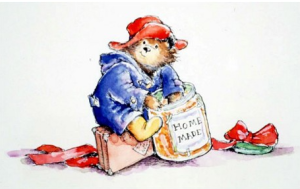 Bond named the bear Paddington and started to write stories about it, “more for fun than with the idea of having them published. After 10 days I found that I had a book on my hands. It wasn’t written specifically for children, but I think I put into it the kind of things I liked reading about when I was young.”

Paddington only arrived in England with his hat.

Although most will associate the bear with his sensible uniform of hat, coat and boots, the latter two garments arrived in England after he did. Paddington was given his blue duffle coat by The Browns shortly after they took him home from Paddington Station, and he received the boots for Christmas in the 1964 book Paddington Marches On. As for his old bush hat, that belonged to Paddington’s uncle Pastuzo.