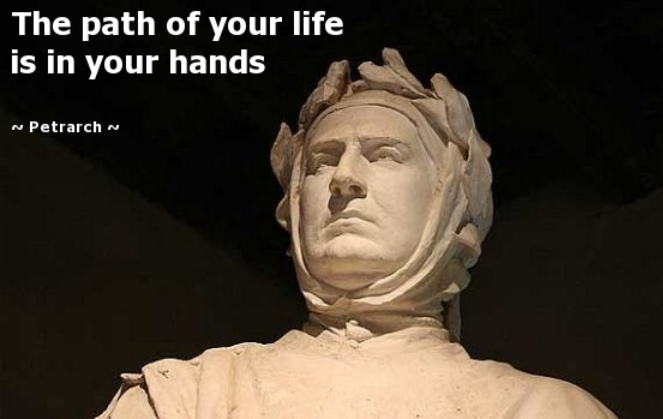 Francesco Petrarca (July 20, 1304 – July 19, 1374), commonly anglicized as Petrarch was an Italian scholar and poet in Renaissance Italy, and one of the earliest humanists. Petrarch’s rediscovery of Cicero’s letters is often credited for initiating the 14th-century Renaissance. Petrarch is often called the “Father of Humanism”. In the 16th century, Pietro Bembo created the model for the modern Italian language based on Petrarch’s works.

Petrarch is best known for his Italian poetry, notably the

Canzoniere (“Songbook”) and the Trionfi (“Triumphs”). However, Petrarch was an enthusiastic Latin scholar and did most of his writing in this language.

English Translation by A. S. Kline

stirring it, and being softly stirred in turn,

scattering that sweet gold about, then

gathering it, in a lovely knot of curls again,

you linger around bright eyes whose loving sting

pierces me so, till I feel it and weep,

and I wander searching for my treasure,

now I seem to find her, now I realise

now longing for her, now truly seeing her.

Happy air, remain here with your

why can’t I exchange my path for yours?

Petrarch was the first to characterise the Middle Ages as a period of darkness.