I have been a lover of literature ever since… well, does Spot the dog count?

Books have played an enormous part of my life for as long as I can remember and this year I took on the monumental task of writing a novel that has been buzzing around in my brain for the last few years.

Along with my final leap into writing I discovered that I love blogging! ♥ That daily link with people all over the world, getting to share the knowledge you’ve learned and getting to know a bit about their world too. ♥

This progression lead me to my love of literature of the modern day and my enthusiasm to go absorb all the UK has to offer. 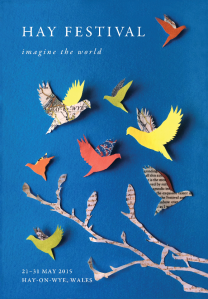 The “big cheese” of this is of course Hay Festival. Held in one of the most beautiful parts of the world the Kingdom of Hay-on-Wye. Population – approximately 1500, number of book shops – 25, and a book festival attracting over 100,000 visitors. I signed up and at first the tickets I selected were unavailable, so I forgot all about it until a week later an email landed in my inbox. I immediately booked, booked a hotel and a few months later we were off!

I had no idea what to expect, I’d never even attended an author book signing or a creative writing class. Would I like it, would it all go over my head? With hope in my heart (and a fold-up backpack in my handbag for all the books I was sure to buy), we headed in.

The town was amazing, banners and bookshops everywhere. With the sun shining brightly and musicians playing music in the streets, we were all in the mood to party. After a quick lunch we headed along to the festival site.

A quick scout around the tents, at first I must admit we were a bit disappointed, the town had been so fun and lively, the festival seemed a bit..well..drab. There was nothing (free) going on such as music, readings, or even group activities. We wandered around a few of the stalls, then grabbed a cuppa, tried to head to the one bookstall (at a book festival) but it was so packed and 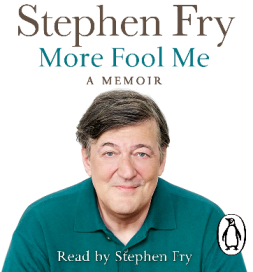 warm and stuffy that we had to leave. The town had offered all this and more.

Eventually we started watching the shows we had paid for, at this point the festival truly shines. The star attraction for me, though it may seem cliché was Stephen Fry. He was truly amazing and gave the most, inspiring, heartfelt and honest answers that my partner and I both left the show in Awe! Although his new book has mixed reviews on amazon, hearing him discuss this and many other things I would now purchase it. More than that I now would like to have the audiobook of it, an area of books I have never before

Finishing up the evening we had the joy of going to see comedian Jason Byrne. He was amazing and after a day of constant intellectual stimulus, getting the opportunity to sit back with a drink and just have someone make you laugh (until I had tears streaming down my face at one point!) made this trip a wonderful, memorable, joyful occasion.

This has been the highlight of my summer this year. My advice to anyone would be, if you think you want something, go for it! Throw yourself all in, you’ll be surprised were the journey will take you!

3 thoughts on “Happiness in Hay”