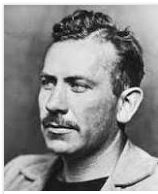 John Ernst Steinbeck, Jr. (February 27, 1902 – December 20, 1968) was an American author of twenty-seven books, including sixteen novels, six non-fiction books, and five collections of short stories. He is widely known for the comic novels Tortilla Flat (1935) and Cannery Row (1945), the multi-generation epic East of Eden (1952), and the novellas Of Mice and Men (1937) and The Red Pony (1937). The Pulitzer Prize-winning The Grapes of Wrath (1939), widely attributed to be part of the American literary canon, is considered Steinbeck’s masterpiece. In the first 75 years since it was published, it sold 14 million copies.

The National Steinbeck Center, two blocks away from his childhood home, is the only museum in the U.S. dedicated to a single author.

One of my favourite books I read at school was ‘Of Mice and Men’. It is strange to think how a story about the American great depression can capture and captivate a teenagers imagination but this book does and I am grateful that the curriculum included it as I know it has recently been debated whether this should stay or not. I remember reading a little bit extra every night and finishing the book far quicker than the allotted time, but it was one of the books were I just had to get to the end, to know what happened, the definition of being a page turner. I hope the education system does not deprive children of the chance to fall in love with a classic.

For those wanting a little extra reading – this is a fun article on The Grapes of Wrath: 10 surprising facts about John Steinbeck’s novel